From Recovery To Endurance

A Journey From Recovery To A life With Endurance Sports

It was time to take on my third Ironman and try to push my body to that red carpet finish line. Ironman Santa Rosa formally Vineman, although only the bike course is really the same, was where the 140.6 miles of fun was taking place. Santa Rosa has just gone through a lot of tough times with the fires that took the homes of thousands of families. One of those families was that of my friend Shelly Howe who was also racing along with me. Everyone handles tragedies differently and I am very proud of Shelly who has fought to overcome and rebuild along with her amazing and supportive husband Darren. It was an honor to share the course with her and other incredible athletes. 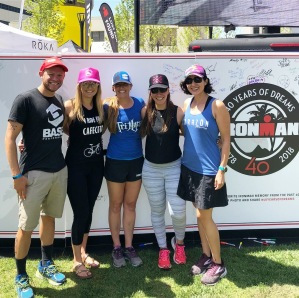 Here we go, Race morning started off like all others with a 3 AM wake up alarm to start eating and consuming calories. Gathered my morning gear and stretched while I waited for my ride to T1 to hop on the morning race shuttle to the swim start. Darren picked me up and drove Shelly and I. I was dressed in my Unicorn Onesie to keep warm in the early morning and to bring a smile to everyone’s face. Taking the Shuttle is probably the better move on race morning, bring along your run & bike special needs bags as you drop those off before boarding the bus. On the shuttle I had my morning bag with all my bike nutrition. The day before when I dropped off my bike at Lake Sonoma they did not allow us to leave our nutrition in our bike or bike bag. I guess the previous year animals got into the bags and helped themselves to our nutrition. The shuttle ride is about a 40 minute drive so I put my head back and took a short nap.

I felt relaxed walking into T2 to organize my bike nutrition. I received a lot of smiles because I was dressed as a unicorn and I think it helped others relax a bit from the morning nerves. I walked around and made sure I said hello and gave morning hugs to everyone I knew before heading down to the swim start. The morning bag drop off is located at the bottom of the boat ramp just before you self seat yourself for the swim start. Natalie, Jillienne, Gaby, Shelly, Tatiana and I all met up and hugged one last time as they sung the national anthem to get this thing started.

The swim was not what I planned but not a horrible one either. I placed myself in the 1:20-1:30 finish group. The swim is a two lap swim in the beautiful lake. The air is clear and water temperature is about 60 degrees. I found that as time went by and the wind picked up it was becoming harder for me to find a rhythm in my swimming and I couldn’t swim as straight as I would hope. I’m not the best swimmer but I can hold my own, However I just could not get it together in this lake. First lap was 44 minutes,”Okay, I’m still on track” I thought. All I had to do was maintain and I would come in at my estimated time range. But I still was not feeling comfortable in the water and I found that I was just swimming to get it over with rather than racing the swim, hope that makes sense. None the less I kept pushing and trying to sight as best as I could as to not swim more by zig-zagging. I came out of the water in 1h:33m and swam just a bit over 2.5 miles. That marked my slowest ironman swim and also my longest swim ever. I jogged my way up the quarter mile boat ramp to T1 and took my time preparing for the ride ahead of me. 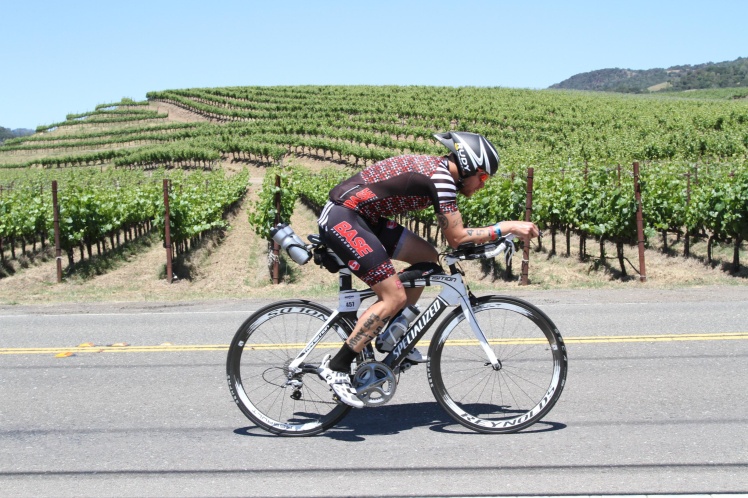 The bike is beautiful but really when you see one field of grapes you’ve seen them all. I had a very specific nutrition plan that I wanted to execute on the bike and I am happy that I stuck to it. I kept telling myself that it was all about nutrition over speed. So if I found myself in a situation where I wanted to take advantage of a pass or bomb down a hill, If it was time to eat it was time to eat and I did that first. The road was a bit technical with a lot of rolling hills but the road conditions were terrible. So many potholes and gravel made for an uncomfortable race. I was worried I would get a flat or that I would loose nutrition. I saw plenty of athletes loose a bottle, I even was an entire seat bottle cage fall off a bike. Lucky for me all I lost was one CO2 cartridge. It started to heat up on the completion of the first loop and the winds really picked up on the second loop of the bike. the climbing on the course wasn’t too bad and I didn’t even mind the second climb up Chalk Hill. I stayed focused on my pedaling and eating and was working well on the bike. At about mile 104 I arrived to a street intersection where the cops had blocked off. Apparently there was a police chase that came to an end on a section of the course. This held up about 100 athletes and we all flooded out to T2 together. Finished the bike in 6h30m exactly on my goal time. Off the bike and made my way to transition to get ready for the marathon.

The run is always tough for me and now it plays big mental games because it has defeated me so often. I tried very hard not to think about the past and just take it easy, get it done and smile. This time around I changed out of my triathlon shorts and into some 2XU running compression shorts to help with any future chafing and cramping. I ran with a water bottle as I did in training and carry a bit more nutrition so I can eat more if needed. I came out of T2 and saw my wonderful wife waiting for me, I stopped gave her a kiss and was off. The downtown crowed has tons of energy and the volunteers are amazing. The run course is a three loop course half dirt trail and road with plenty of area for spectating. My goal was to stay at ten minute miles and make sure to hydrate. All was going according to plan until mile 8 towards the end of the first loop. It happened again, my stomach was upset and my body decided to throw up what nutrition I had left.

Not again. I started to feel weak as I started my second lap pace was not on my mind now it was all about forward motion. Jog a little walk a little, whatever I can do to try and get to the finish. Now that I have had sometime to think over this moment I truly believe my mind got the best of me on the second loop. I mentally defeated myself and convinced myself that my body could not push and walking was the best option because I had plenty of time. I tried to take in a gel on the first half of the second lap and immediately threw it up, my body just didn’t want to take in all the sugar but drinking water made me feel good as long as I did it slowly. I walked most of the second loop recovering to try and give it my all for the third.

I was cold as I started my third and final run lap. I asked a volunteer if they had an extra volunteer shirt I could have and when he noticed how cold I was he gave me his shirt. I owe that volunteer so much I wish I could remember his name. with an extra layer of clothes on I made my way out trying to pick up the pace a bit and salvage my run. At about mile 20 I saw Jillienne running ahead of me and I ran to catch up to her. It was crazy that I was able to pick up the pace and it was then that I realized I had plenty left in my tank and the recovery walk/jog was working. I ran with Jillienne for a bit and she began to tell me that she was on her way to a PR. I told her that I would stay with her and we can push each other to the finish line. Those miles were just want I needed to lift my spirits. With just under 4 miles left she started to have knee pains and started to slow down, she told me to go ahead and I took off. Holding my side and breathing hard I hauled ass to that finish line. Pushing the pace and running passed people, it was here that I realized that if I pushed it I would beat my time from Ironman Arizona and this would not be my worst Ironman time. That thought carried me towards the finish line. I picked up the pace so much that it threw off the tracker and my wife almost missed me as I crossed the finish line. I completed the run in 5h41m17s.

I finished Ironman Santa Rosa in 14h07m45s and although I had some tough times out there It was a wonderful race and I couldn’t be prouder to get number three done. This was also the first time that Mike Riley called my name at the finish line, it was everything I hoped for and I felt so honored with his words. “Jaime Martinez Recovering Alcoholic from Huntington Park California, You are an Ironman! Fighting addiction through endurance sports. Good man.” I let out a big yell as I crossed as if it were my first. I’m astonished on how far I’ve come in this sport and in my personal growth. I exited the finished area and gave my wife a huge hug and kiss. She is the most wonderful person in the world and I am beyond blessed to have her support. I stayed and watched as all my Iron buddies finished. We shared hugs, took photos and celebrated.

This site uses Akismet to reduce spam. Learn how your comment data is processed.